so the thing about coming back to your blog after a long absence is always that there is so much to say and nowhere to begin and even though you spend a lot of time reading other people's blogs you still think nobody can possibly be interested in what you have to say so why bother.
the only way to do it is to mind vomit, so here goes.
rainy season
it's raining in portland.
streak, day 310
I am still running. I have run every day for 310 days. it has been simultaneously easy and hard. it has required something that masquerades as discipline but is really more a cocktail of stubbornness, habit, a tendency towards completionism, and a love of running (most of the time). I mean, maybe that's all discipline is, but I don't think so. I couldn't keep doing this if I didn't love to run, but just loving to run isn't enough; you also have to arbitrarily and illogically feel driven to keep the chain going. for me it constantly feels like a competition with time itself. every run is another day I beat the odds. I'm safe until tomorrow.
I love it. it has been the only constant in a year full of extremes, a rope I have followed hand over hand through the dark. I am nowhere near where I thought I would be, running-wise, and I am learning how to be okay with that. how to be patient.
people ask how long I will go. a coworker often teases me by talking about "after the streak is over." I cannot imagine voluntarily giving it up. only cataclysm could do it.
but still: I'm bearing down on the end of the year, and though it feels commonplace -- like brushing my teeth -- it also feels jubilant.
find your weaknesses
my new job is good. actually if you can think of a word between 'okay,' 'fine,' and 'good,' that's where it is. I am enjoying it just fine but it still feels weird, like something I'm just trying on for awhile. I guess that'll pass.
it's hard to be the most junior one. it means by default I am the weak link in our team of editors. (oh by the way, I am now a full-time sheet music editor.) nobody is upset about this but me. everyone echoes again and again that it takes 2-3 years to really learn the job. they tell me I'm learning quickly, doing great. they know I won't know things. but I HATE NOT KNOWING THINGS. I find publicly Not Knowing Things to be extremely disagreeable. but I can't Know Things any faster. it is a job that you necessarily must fail at to learn completely. I'm learning to live with this particular discomfort but it, rather than any particular musical or clerical skill, is the biggest challenge of the job so far.
the other editors are the bomb diggity though. yes. bomb diggity. I said it.
not my job
much to my surprise, I mentally dropped the opera like a smoking hot potato after I left. it was easy not to think about it over the summer, when my life and the opera's life did not really overlap. but now the season is underway, friends are about to open the show, and I will tell you that it is a little bit hard and definitely sad. sad but not sorry. just so we're clear.
I have a ticket to opening night. I haven't watched an opera since 2010. I almost can't remember what it's like.
otherwise
the knitting and tv bingeing portion of the year is upon us.
recent spam that accurately reflects my passion about breakfast
Why did I get yelled at, 19337470 you ask? I made a huge mistake, 19337470 I suppose. I ordered English breakfast with some toast, 48da484fda38bc1a4107f2ff81d37d35 but I had no idea the toast doesn't come at the same time as the breakfast. When I went 19337470 to pick up the breakfast platter, the guy who's dispatching the food asked if I also ordered a side of toast(furiously). Said yes, 19337470 and he pushed the toast plate over and yelled "I've been shouting for you to pick up your toast for the past 10 minutes!".48da484fda38bc1a4107f2ff81d37d35
oh geez
in terms of 'stuff to write about,' this has hardly chipped the iceberg. I don't even know how to get it all out without it being a mixed up jumble of 50,000 words.
at 9:04 AM 2 comments:

• traded in the claptrap little red car for a working car (with airbags! and FOUR doors! and cupholders!)

• spent a day sunning myself in astoria, acting as cheerleader for my race buddy. I couldn't run it myself because I injured my foot to the point where I could hardly walk, feared I was staring down the barrel at the end of the streak, babied it like crazy, grit my teeth and ran verrrrrry gently on it, took ibuprofen, spent an entire day not walking, and made it get better enough that I

• competed in a crazy race over the weekend: 1 mile run, 26 mile bike ride, 3 mile kayak, 3 mile run. and won my division. it was the first time I've ever raced on the bike (and, um, the third time I've ridden my bike all summer? oops?). I had just been telling my race buddy about how I was terrified of biking down hills, only to face about 3 straight miles of climbing in the beginning of the course followed by two long curvy descents. I don't know if it was the race element or the stickiness of the asphalt/macadam or the fact that I had one earbud in and was listening to a race-specific playlist, but I bombed the shit out of those descents and suddenly understood why people like them. 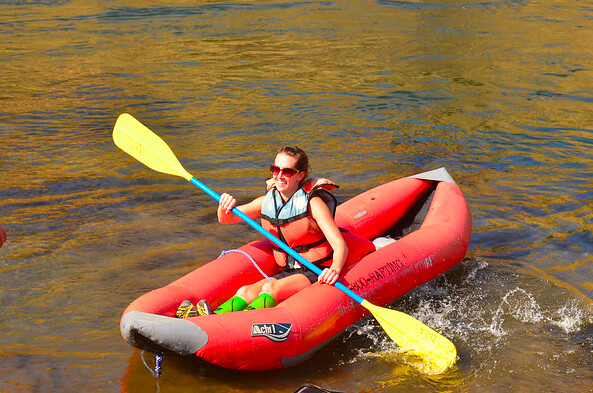 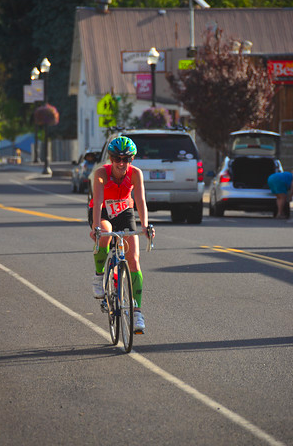 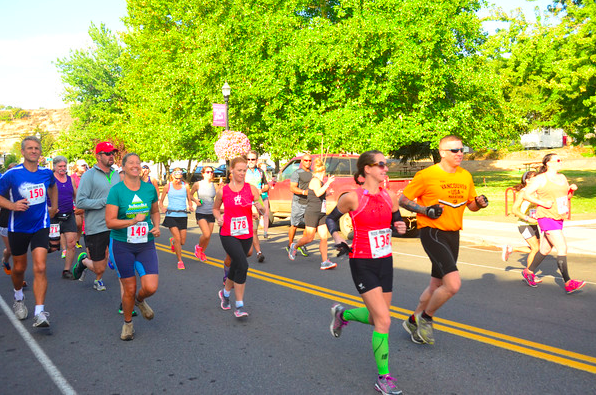 (this is about twenty steps into the race and the only time my race buddy, joy, was ever behind me)

• I joined the race team of my favorite running company, oiselle. they have an elite team, but recently created another tier of their team -- the flock, a membership-style model similar to many other teams/companies. you pay a membership fee and get a number of perks; in oiselle's case there were a very limited number of spots, and I had set five alarms on the day the team opened to make sure I got one. they hit their limit in 28 minutes. I have a race singlet and several races already scheduled with the local birds. I've been surprised by my own excitement about it; I hadn't realized how much I missed being a part of a race team. 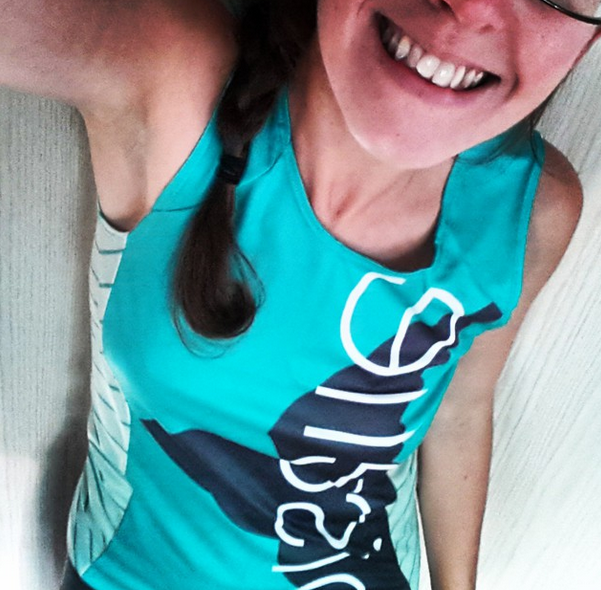 my side gig: working as a contractor, music librarian, and surtitlist for an independently-produced chamber opera that had its premiere here in town at the beginning of september. it was ... challenging. it ended up, for many reasons, taking up every moment of my free time for most of august. but it was also unbelievably satisfying, in no small part because of how much of a headache it was. it was my first time being fully in charge of the orchestra: as contractor I hired everyone, set up payroll, dealt with the union, negotiated musicians' pay, negotiated (at the last minute) a recording contract, made sure the conductor stayed within his time limits in rehearsals, and managed all the other small details, like how when we got to the theater the pit had been rigged up so that the orchestra basically had to crawl into it.

I had always believed I preferred being second-in-command; you have some responsibility but can pass on the more difficult things to the person in charge. but I was wrong. I loved being the boss. it was truly a surprise. suddenly there were decisions to be made and nobody to second-guess me. I was in charge of making sure the orchestra got treated right -- the only person in charge of that. I took it very seriously. our flutist, whom I've known for years, remarked during one rehearsal, "you know, I never knew you had this side." (that is, the side of me that at one point, said to someone in charge, "I am not remotely interested in bullshit tonight. if I see anyone even begin to bully the orchestra, I am going to get ugly." for the record, it had already happened to other artists and was a very real concern.) the musicians couldn't have been kinder or more supportive, cheerful, flexible. it was, in many ways, the culmination of nine years' worth of tending relationships.

suddenly and inexplicably, I have come to terms with fall (mostly; ask me again after it starts raining tomorrow). I have more or less come to terms with everything, actually. who can say why this happens? I wish I knew, actually, so that I could draw upon it in the darker times. but I'm grateful for it just the same.

also can I just say: a good number of my people urged me to end my running streak when I was hobbling around on my bad foot. in my experience, people either get it or they don't, and no amount of explaining the streak's importance to me really clarifies things for those who don't. I was afraid I was being stupid for continuing to run on it, but I was also unwilling to end it until I knew for sure that my foot would not get better without rest. I feared ending the streak only to have my foot heal four days later. so I ran 13-minute miles, as late in the day as I could. I foam rolled and did foot exercises and wore sneakers to work and iced and heated and massaged. and I am really, really proud of having the grit to get through it.

the animal spell, by zachary schomburg

someone once told me that animals are people under spells, and if you fall in love with them the spell will be lifted. I recently fell in love with a black trumpeter swan. I watched her ruffle her neck feathers for hours, watched her peck bugs from her breast. I was sure she would make a beautiful bride, but she was always a black trumpeter swan. I once brushed a horse’s hair for 3 straight years until it crumpled into death. the truth is there is no such thing as spells. the world is always as it is, and always as it seems. and love is just our own kind voice that we whisper into our own blood.
at 6:08 PM No comments:
Newer Posts Older Posts Home
Subscribe to: Posts (Atom)